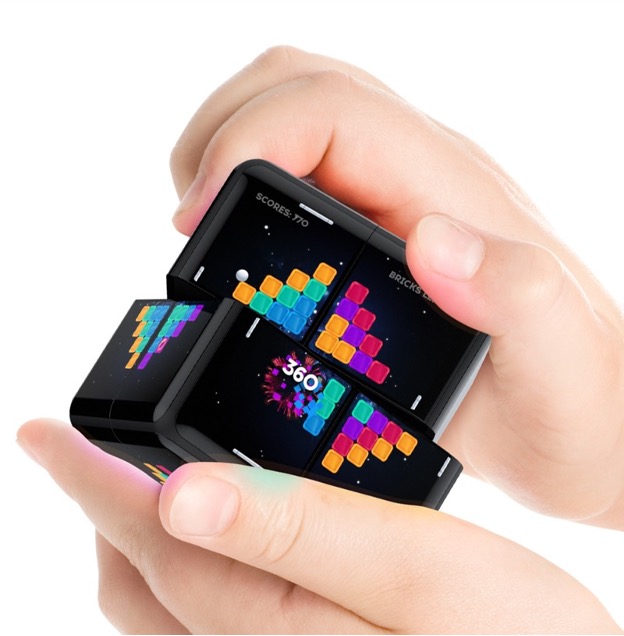 The story of Cubios, the company that is the creator of the WowCube, started as an idea of a 13-year-old boy, Savva Osipov which got built into a company by his father, Ilya.  The WowCube is a handheld gaming device shaped like…a cube, which many are calling a Rubik’s cube with displays on it.

What is it?
The WowCube is made of eight connected modules and has 24 high-resolution screens covering the six sides of the cube.  The cube is controlled by twisting, tilting, tapping and shaking it, thanks to a built-in gyroscope and touch screens.  WowCube has six approved patents and three patents pending – the patented magnetic connectors enable a continuous flow of information among the eight modules for a seamless gaming experience.

Preorder launch.  They will start a preorder campaign in September as well as open the software development kit to developers to create games for the cube then.  The plan is to launch the cube with several games preinstalled including games called Pipes, Scrabble, Space, Puzzle, and Maze. You will be able to load up to 24 more games on it with the WowCube Store mobile app and Bluetooth.

Zeptolab, the developer behind one of mobile gaming’s early big hits with Cut The Rope, is one of the companies developing games for the WowCube.  The company said it has interest from distributors in 18 countries with preliminary orders for 155,000 devices.

Financing.  Cubios has raised a total of $4.5M since inception of the company in 2016, and recently completed a financing round of $1.5M from the founder of gaming payment services company Xsolla, Aleksandr Agapitov.

More than 350 million Rubik’s Cubes have been sold since it was invented in the 1980s, so the WowCube has a ways to go if it’s going to stack up to its adopted namesake.