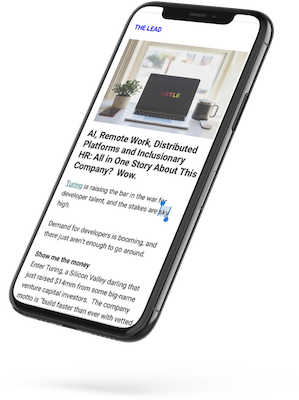 Join 10,000+ founders and innovators staying in the loop

It’s Not All in the Name

NEWS YOU CAN USE

Going against the wave.  Notion is bucking the trend of startups lately that have been doing belt tightening.  Instead, it acquired calendar app Cron in June, acqui-hired the Flowdash team earlier this month, and launched a global ad campaign.  Life is good when you are cash-flow positive.

Complex.  Researchers at Cornell have identified the master problem underlying cryptography.  In order to create cryptographically secure apps, you need so-called, true one-way functions.  These in turn depend, according to the researchers, on whether computational complexity, known as the Kolmogorov complexity, is sufficiently hard to compute.  More here.

Avid readers.  Generation Z loves subtitles, and creative captioning in shows like Stranger Things has basically turned it an unlikely creative art form.  A 2021 survey by the captioning charity Stagetext found four out of five 18–25-year-olds use subtitles all or part of the time.  The likely reason: so they can watch their favorite show while at the same time checking their smartphones and not miss anything on either screen.

Cheap date.  Inflation’s claws have reached even the dating scene – a survey of 3,000 users on dating app Hinge revealed around 41% were more concerned with the cost of dates now versus a year ago.  Even high-net worth folks in NYC who would typically drop $150 on a date are now trying to get away with shelling out 75 bucks or less.

Go to sleep.  The American Heart Association recently added sleep to its list of factors critical to heart health, along with the usual suspects like diet, physical activity and blood pressure.

WHAT ELSE IS GOING ON

Moon caves.  The moon has pits and caves with temperatures hovering around 63 degrees Fahrenheit, just right for human habitation, according to new research from planetary scientists at UCLA.

Your own private dinosaur.  Sotheby’s sold an “exhibition-ready mounted skeleton” of the Gorgosaurus, a dinosaur related to the T-rex, at auction for around $6M to an unknown buyer.  That’s gorgeous.

Security is a myth sometimes.  JusTalk, a popular international messaging app, left a database with hundreds of gigabytes of unencrypted private messages publicly exposed to the internet without a password for months, according to security researcher Anurag Sen in Techcrunch.

More tech layoffs.  Shopify is slashing 10% of its global workforce which equals around 1,000 employees.  An internal memo detailed the reason for the layoffs as a bet gone wrong that the growth made during the pandemic would be sustainable.

What was that?  Have you heard the new sound effect when you pull down to refresh your feed on Twitter on a smartphone?  Someone at the company thought this (weak) attempt to replicate a bird call was a good idea…

Coinbase<>SEC.  According to reports, the SEC is probing whether Coinbase is violating securities law by allowing users to trade digital assets that haven’t been registered as securities.  Coinbase fired back in a blog post that they have not been offering any unregistered securities for sale.

Getting into to Web3.  ScienceMagic.Studios raised $10M in pre-seed funding and is spearheaded by former Guardian Media Group CEO David Pemsel to advise brands on how to use NFTs and social tokens to increase interaction with fans and communities

A bright spot.  It’s been a tough year for Coinbase, but their corporate venture arm, Coinbase Ventures was still the #1 most active corporate VC investor (tied with Google Ventures) in Q2 2022 with 28 companies invested.

Bored Ape game demo.  Yuga Labs, the creator of the Bored Ape yacht Club NFTs, hosted a big and private demo of their upcoming game Otherside this past Saturday (pic above).

It’s called “First Trip,” and the demo had around 4,500 community members logged on for an hour-long demo of the game led by a giant Bored Ape.

Ahead of their time.  99-year-old magazine Time is all in on the new decentralized future – their NFT business called TIMEPieces has dropped more than 20,000 TIMEPieces NFTs for a $10M profit.  The magazine also accepts 33 cryptocurrencies for digital subscriptions.

DeMuseum.  Arkive is setting out to build the world’s first decentralized museum.  A DAO will handle curation to let the community vote on which items to acquire and display, and the items themselves will become NFTs to manage all historical provenance, authentication and status on the blockchain.  Arkive closed a $9.7M financing led by Offline and TCG Crypto.

Tesla’s bitcoin.  Tesla sold around 75% of its bitcoin holdings, worth approximately $936M per their earnings call and explained the reason for the sale as being uncertainty about Covid lockdowns in China…when in doubt, blame Covid.

‘Too hot’ girlfriend spy plot.  Ukrainians trying to find Russian pilots to defect and fight for their side foiled a Russian spy plot when one of the pilots showed up with a girlfriend that was way too hot for him, alerting the Ukrainians that she was a Russian spy.

D&D at the movies.  The trailer for the new Dungeons & Dragons movie from Paramount is out and it looks awesome.  But fans have reason to be cautious after the numerous flops the franchise has made at the box office over the years.

Scary robot.  A chess-playing robot with a mechanical arm broke its opponent’s finger during a recent match in Moscow.  The opponent was a 7-year-old boy, and apparently the robot mistook the boy’s finger for a chess piece.  Kudos to the kid: he finished the match in a cast but no word on who won.

Vain Lego.  Lego is launching a new Minifigure Factory that lets you create a customized minifigure of yourself for $12.

Look if you must.  Here are exclusive photos by Page Six on a shirtless Elon Musk as he parties with the ladies on a luxury yacht in Mykonos this past Sunday.

Time killer.  There’s a new Robot Game that you can play while you wait for a Google Meet call to start – it’s an endless runner game like Dinosaur Game on Google Chrome.

Singularity getting closer.  Synchron, a brain-computer interface startup, implanted its first device into a human, beating Elon Musk and Neuralink to the punch.

The 1.5-inch device was put into the brain of an ALS patient at Mount Sinai West medical center in New York on July 6 to allow the patient to send emails and texts by using their thoughts.

That’s a Chevy?  Chevy intro’d its new e-crossover truck – the Blazer EV offers a combo of performance and everyday utility with 557HP of all-wheel drive, 0-60 mph in < 4 seconds and 320 miles of driving range without recharging.