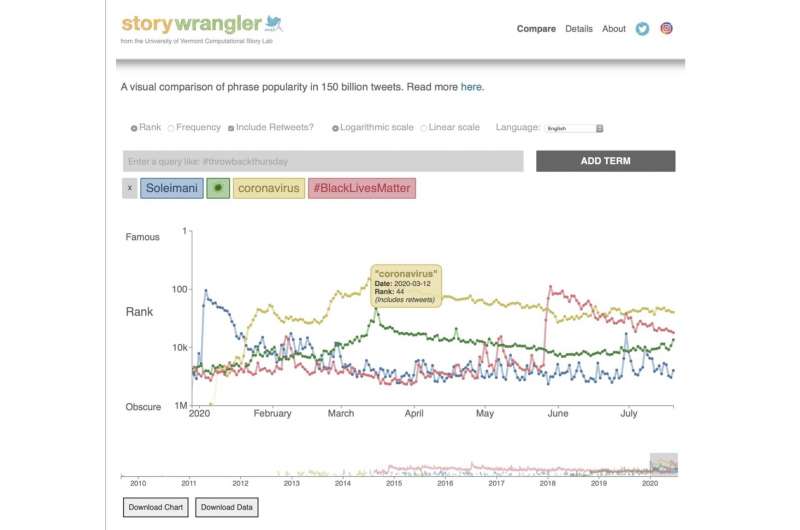 The Foundation series by Isaac Asimov is a classic sci-fi story from the 50s about a massive world computer and a new science called psychohistory that can make general predictions about the future behavior of societies as a whole.  FYI to us sci-fi nerds: it’s finally being made into a TV series on Apple TV in the fall.

Well, we are now one step closer to the fictional science of psychohistory IRL with the introduction of Storywrangler, software created by a team of eight scientists from the University of Vermont, Charles River Analytics, MassMutual Data Science and a group called the Computational Story Lab (https://twitter.com/compstorylab).

"This is the first visualization tool that allows you to look at one-, two-, and three-word phrases, across 150 different languages, from the inception of Twitter to the present," says Jane Adams, a scientist on the team who recently finished a three-year position as a data-visualization artist-in-residence at UVM's Complex Systems Center.  Hats off to the University of Vermont for creating that cool sounding position.

Mind boggling applications.  One of the tests of the massive dataset of the Storywrangler involved the team using it to predict political and financial turmoil. Upon examination of the frequency of the use of the words "rebellion" and "crackdown” around the world, they discovered a significant association of changes in the frequency of those words with changes in a well-established index of geopolitical risk.  Voila, you can basically use Twitter (or other social media) to anticipate major global events.

Global sensor or global censor?
The team behind the study, with support from the National Science Foundation (Foundation, hmm), is using Twitter “to demonstrate how chatter on distributed social media can act as a kind of global sensor system -- of what happened, how people reacted, and what might come next.”  Ok, but we also see potential for totalitarian regimes to use a tool like this to further control their populations.

It’s not limited to Twitter – data other social media channels like Reddit, 4chan and Weibo, could also be fed into Storywrangler or similar tech to analyze global reactions to major news events and even track the popularity of politicians and celebrities.

With the proper inputs and model, Storywrangler could be exactly what it’s called – software that takes casual conversation on social media and returns insights and narratives on any number of topics and themes about people and events.