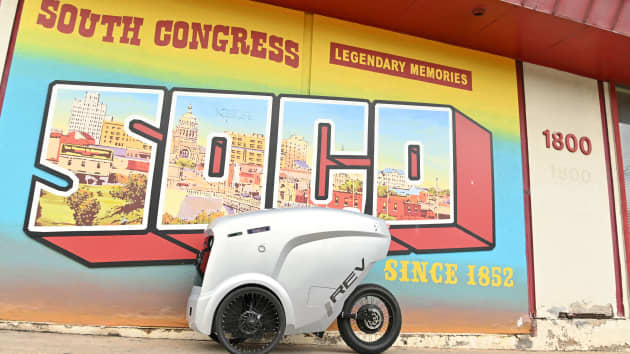 The future of autonomous driving may not be the lofty vision of Elon Musk and Tesla but rather the small, dorky vehicles delivering pizza by driving at 15mph in the bike lane.

For the past month or so, autonomous delivery vehicles built by startup Refraction AI have been delivering pizza pies being slung by (you can’t make this stuff up better) Southside Flying Pizza in Austin, Texas.

Refraction AI makes the REV-1, an autonomous vehicle that is 4 ½ feet tall and weighs around 150 pounds, possibly the same weight as your average St. Bernard.  And it’s a three-wheeler that has been designed to drive in the bike lane to the chagrin of most bicyclists and the joy of hungry pizza patrons.

So how is a trike going to take down the ambitions of Elon Musk, you say?  Well, according to Refraction AI CEO Luke Schneider, the future of AV has to start small and build from there – Refraction AI is focusing on delivering packages to start and not people, and obviously is starting with small and much less sexy vehicles than a Tesla.  Also, if the vehicle encounters anything tricky that it can’t handle itself, there are company“pilots” standing by to remotely and temporarily take the wheel.

The iterative approach works in other contexts, so why not?  And given the problems plaguing the self-driving industry like missed deadlines and lawsuits for accidents, this kind of approach starts to make more and more sense.

The REV-1 follows in the footsteps of Nuro, which has been delivering Domino’s pizzas in Houston since April.  The Nuro is a bit bulkier than the REV-1:  think golf cart versus trike in size and a little faster too in that its top speed is around 25 mph.  Last week, the company announced that in addition to working with Domino’s, the Nuro will deliver packages for Fedex.

Nuro was founded by former Google engineers Dave Ferguson and Jiajun Zhu who worked on Waymo.  The company has raised $1.5B  and sports a $5B valuation, while REV-1 has raised around $8 million so far.

Given the early success of these pizza deliveries, we may be hailing the future of autonomous vehicles one pizza at a time.